Samuel Torres never thought he would be where he is now when he started school at the National Holistic Institute in early 2021. Looking back, he is a Texan native who had an extensive career in plumbing. He and his wife, Brandi, made the move to California in October of 2019 in pursuit of alleviating several medical issues she was experiencing in Texas. A few months later, the pandemic hit, then Samuel suffered a devastating back injury – and suddenly – Samuel began to question what he was supposed to do for work since plumbing was no longer an option.

Samuel, a current Advanced Neuromuscular Massage Therapy (ANMT) Program student at NHI Sacramento, recently shared his story of how his life has shifted, grown, and become “priceless” in just a matter of months with the help of NHI and his dedication to learning!

Samuel sat down for an interview with his ANMT Program Mentor, Alicia Priebe and shared the following responses below.

Why did you choose NHI?

“I was not sure if I would like being a Massage Therapist. It was my wife who encouraged me to do it. She did the research and was the first to look into it. Brandi had a massage therapist in Texas who helped her back pain, and I thought of joining the school to help her and myself with my own back problems.

The Core Program was like a paddle boat going out into the ocean – it was enlightening. I remember being nervous to touch glutes – you know that is not mine to touch. Then you keep going in the program, and now it’s not just glutes. Those muscles all have a purpose and a reason.

I knew all along I wanted to be a part of the Advanced Neuromuscular Program – that is where the meat is – the information, the why and the how! I knew I wanted that program! I have one shot to learn it and apply it, now is the time! Applying what you learn can get you anywhere!”

And It HAS taken him – to big places!!

Did you ever think that as a student, you would work for a professional sports team?

Samuel was approached during his Core program with an opportunity to do a part of his learning with the Sacramento Republic Football Club who has called Sacramento home for the past 9 seasons. Of those, they have made their way to the playoffs 7 times! In 2014, Sacramento Republic FC brought home the championship title. Earlier this year, they went to Orlando, Florida – where they were runner up in the US Open Cup.

Samuel – was on the field, as one of Sac Republics’ first ever paid Massage Therapists! 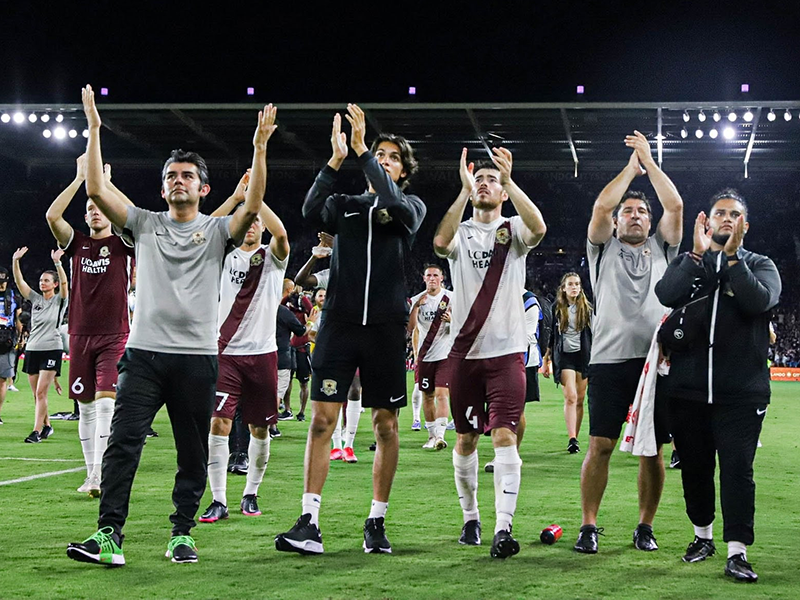 Samuel Torres (left) of the field during the US Open Cup

How did you get involved with Sacramento Republic FC?

“It was early in the second half of my Core program. I did not even know deep tissue yet. A marathon event came up and NHI was looking for student therapists to volunteer sports massage for the runners. It was at that event, that I thought, ‘Wow! This is cool!” Shortly after, Jonna (NHI Sacramento’s Student Life and Career Coordinator) approached me and another student – Sac Republic FC was looking for student therapists. I was so excited – and a bit star struck!

As a former soccer player, myself, you go to the games, you hear the fans cheering and think, ‘Wow those guys are really good!’ and then, that same guy gets on your massage table after the game!”

How did you go from volunteering to being hired by Sacramento Republic FC?

“When I started, they told me, “We are not hiring!” I was just looking to get my foot in the door and thought how cool it would be to get the job here. So, after the players got off the table feeling better, they would say, ‘Wow! You are magic!’ and I would say, ‘No, I just know the body.’ Then I would tell that player to go tell everyone how great the massage was, in hopes to stay!

It was an Athletic Trainer who pushed to get a Massage Therapist on staff.

After creating a contract, negotiations, and a lot of research – Management decided to hire 1 paid Massage Therapist – the first in the team’s history.”

How did NHI help prepare you for this role?

“Professionalism – how to talk to clients with care and knowledge has carried over from the classroom to how I talk with the athletes.

Body Mechanics – NHI teaches you from the start how to protect your body, so you do not get hurt and can do massage correctly. It really helped out a lot with how I do my job now.

Lastly, Deep Tissue! The athletes really enjoy the deep work – I know how to use Swedish, Deep Tissue, and Trigger Point Therapy in one session. It helps enhance the work and strategy in all my sessions.”

What does a day in the life of a Sports Massage Therapist look like?

“When I arrive at the complex, I set up my station for the day. After the team has practice, they let the athletic trainer know if they want a massage. Sessions are short – only 15-30 minutes at the max. This fast-paced environment means I must know what I am working on and have the knowledge of how the muscles effect the body and use the time to educate the athletes on why I would like to work on them again. I do about 1-3 hours of massage per workday.

The schedule is one of the hardest parts – you have to work with the team and around games. I usually go in after practice and sometimes on game day. It takes being flexible.”

What’s your favorite memory so far since working with Sacramento Republic FC? 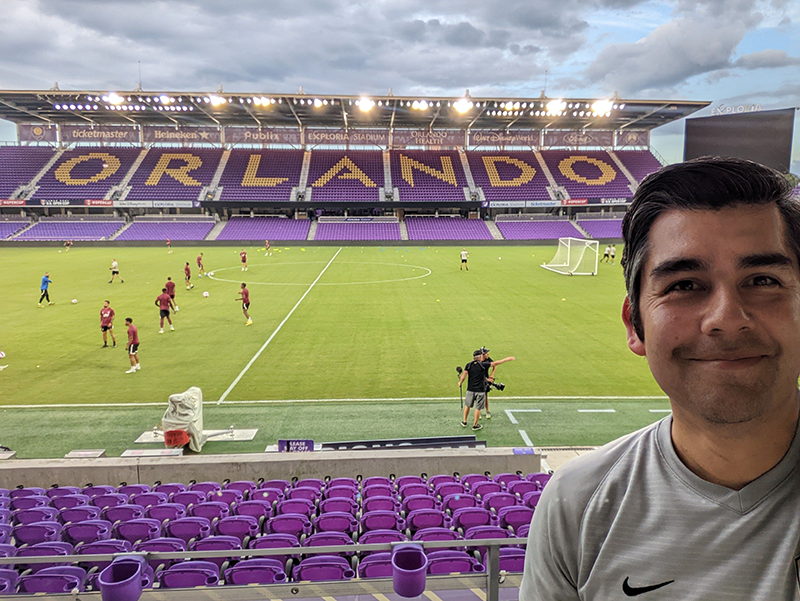 “It was not a game or the crowd. It was one morning in Orlando, we finished breakfast and were preparing to leave the hotel and get on the bus. The team will play loud music often, and that morning as we walked out the music was on, we all had our Sac Republic FC gear on and I just thought, ‘We are here! This is us! Sac Republic, yes, we are here!’ It was so cool to be a part of that moment.”

Last question, do you have work you love?

With a gleam in his eye, a slight side smile and while nodding his head Samuel replied, “I totally do! It stimulates my mind and I get to work with my hands. I enjoy the detective work of knowing how the body works and seeing results. It is incredible. NHI has been priceless, the fees and the time you spend studying – it is more than worth it! I have one shot to learn it and apply it – now is the time!”

Samuel hopes to keep working alongside Sacramento Republic FC for years to come with a hope to also open his own practice in the future!

Get the details on how to pursue a career in Massage and Neuromuscular Therapy with National Holistic Institute. Complete this form to connect with an admissions representative today.