I love to study and observe successful people. Success is a loaded concept, commonly trivialized to how much money a person makes. The more one earns, the more of a “winner” they become. Truly successful people, indeed, experience living from an overflow of abundance: a wealth of love, relationships, community involvement, well-being and—often—money. But some very important people in history did not have a lot of money. Take Jesus and the Buddha as two examples. And some people are so poor, that all they have is money.

Another category in which successful people are wildly rich is motivation. If you’re a motivated person, it’s easy to put your personal goals ahead of those of the people around you. It’s natural and not necessarily a bad thing; however, it is crucial to learn to be a team player.

Acting as a part of a team builds character, teaches empathy, and ultimately assists you in achieving your personal goals. Here’s why:

1)    Yes, you can run a small business pretty independently, but if you ever plan on being employed or running a business that employs others, you’ll have to learn how to work with other people.  The most impressive feats are accomplished by groups of people, not individuals.

2)    If you’re part of a team, you have to prove your merit not only to yourself, but also to everyone you’re working with. When something is expected of you, there are no excuses. You either succeed or you fail. Successful people, in fact, do both– and on a regular basis. If you do fail, however, it’s much harder to rationalize your actions to a team you let down than it is to yourself. Even if your team understands, it’s difficult to swallow the realization that you let down more than just yourself. Because of this, you learn how to deal with responsibility. Successful people are accountable, to themselves and to others. They take responsibility and do not make excuses. Thus, they remain on the cutting-edge of personal growth, contributing to something larger than themselves, and an ongoing expansion of life-force and joy.

3)    Successful people are leaders. Some lead in obvious, out-loud ways, while others do so quietly, playing meaningfully supportive roles. Effective leaders do not act solely as individuals. The purpose of a leader is to work with people to find solutions that work best collectively. Leaders bring people together. The best leaders don’t act with a sense of superiority; they act with a sense of empathy and a desire to serve others. And guess what? The world is starving for authentic, heartfelt leadership, now more than ever (consider the opportunities!).

4)    If you’re on a team, your personal commitment to excellence helps make you a team player. This is because most people are at least a little bit competitive, whether they admit it or not. When you do well, you set a standard that others will want to meet. By pushing yourself, you help push the people on your team. Of course, this works both ways. When you see someone you’re working with do something better than you, more often than not, you’ll push yourself to meet that standard.

5)    Successful people WANT to be team players. They recognize that participating in a healthy community may very well be the highest expression of health and well-being.

I am a big sports fan. I’m also a lover of film, literature, self-improvement, art and nature. But few things get my heart going like an excellent game of Bay Area baseball (go Giants AND A’s!). Sadly, if you watch most professional athletes compete these days, one thing you won’t learn alot about is class or character. Too many of our so-called role models don’t seem to care about anything except themselves. To them, the “team” is nowhere near as important as the “me.” “What’s in it for me?” “I want more playing time. I should be starting instead of them!” “My average”, “My stats”, “My salary”, and so on. With such “me-attitudes” it would be easy for aspiring young athletes to miss the boat and never learn how important “team” really is to success in sports (and in life). Of course, there are still team players out there who truly understand that being a real winner is not about “me”, it’s about “we!” They are as rare, however, as World Series titles for the Chicago Cubs.

I recently read an interview with Phil Jackson, one of the winningest (and coolest) coaches in the history of professional basketball. He commented on what he wanted his recruiters to look for when they searched for new talent. Far too many athletes, he said,  mistakenly believe that what a coach primarily wants in his/her players are talented individuals that will help that coach win. This is only true with the newer, less experienced coaches. When you ask the coaches who have been around for a while what they look for in an athlete, they won’t just talk about superior skills, unbelievable talent, strength or speed. What they are ultimately more interested in is the athlete’s attitude and “coach-ability!”

The most successful coaches today want athletes who are coach-able. That is, athletes who listen, who are open to new things, who take constructive criticism, who respect the coach and their teammates, athletes who are always looking for ways to improve, who are “team players” and who choose to deal with their conflicts and problems constructively.  It’s very interesting that Michael Jordan never won an NBA Championship until Jackson convinced him that he had to involve his teammates more and that he simply couldn’t do it by himself. When Jordan bought into Jackson’s program the Bulls took off and a powerful dynasty was born.

Any sports lover has seen too many incredibly talented teams get beaten by lesser skilled opponents because the athletes on the more powerful team didn’t get along. They didn’t play as a team. They played as a group of individuals competing against themselves for playing time, the coach’s attention and the limelight. The weaker team? Well, they supported each other and worked together. Why is teamwork so important? Very simply: because the whole is always greater than the sum of its parts. Because, as John Maxwell titled his best-seller, “Teamwork Makes the Dream Work.” Because “Together Everyone Achieves More.” 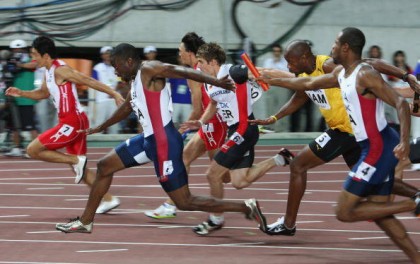 So how coach-able are you? What kind of a team player are you? Are you a team builder or team buster? Do you bring your teammates up or drag them down?  Let’s find out! How many of these “team-busting” behaviors do you recognize as your own?

Talking behind others’ backs

Blaming others – Refusing to accept responsibility

Having a negative attitude

Bad mouthing fellow workers, or team mates, the coach (or boss), or the team (or company)

“I’m the greatest and you’re not” attitude

Giving it only half your best effort

How many of the following “team-building” attitudes do you possess?

Being encouraging to team mates when they are struggling

Having a positive attitude

Being a good listener

Having an open, “coach-able” mind

Understanding that everyone on the team is important for success

Not allowing team-busting behaviors to occur

Taking responsibility for your actions

Trying as hard as you can on a daily basis

Please understand that you can’t turn team-busting behaviors around until you can label them clearly. That’s why you have a coach or a mentor or a manager. Don’t freak out if you find that you sometimes get into these destructive behaviors.  Just make an honest effort to stop them. Take some responsibility today, right now, to begin to develop a more coachable attitude.  At National Holistic Institute a College of Massage Therapy, we are a self-described community of leaders, of role-models, of mentors. We are a team.

At Team NHI we place great value on the power of stories. Many classes begin with stories that set the tone for what is to be learned that day. In keeping with that spirit, I’d like to close this blog with one of my favorite tales:

An 80 year-old man is on his death-bed. He has lived a long and satisfying life. He has accomplished great things. He has amassed great wealth. However, he has struggled with one major frustration and, in his mind, one significant failure. For his entire life his nine sons and daughters have never gotten along. They have bitterly fought amongst themselves, shared petty jealousies and held grudges. Many have not spoken to one another in years. This has caused the old man great pain and suffering.  So he called his eldest son to his bedside and instructed him as follows. “I am dying, my son, and have little time left. There is, however one thing that I wish you to do for me. Contact all your brothers and sisters and have them gather in my bedroom next Tuesday. I wish to say goodbye to everyone together; and one more thing, my son. Be sure that each of your brothers and sisters brings a stick four feet long and one half-inch in circumference.” The eldest son was puzzled by this strange request and thought, sadly, that his father had already lost his mind. Nevertheless, being the dutiful son that he was, he contacted all his siblings and gave them his father’s instructions. On Tuesday they all gathered by their dying father’s bed awkwardly holding their sticks. The tension in the air was quite palpable given the hostility that existed between the brothers and sisters.  The old man asked the eldest for his stick. In the silence of the room, he wrapped his bony hands around the stick and began to bend it. His hands shook as he applied more and more pressure to the wood until there was a resounding snap in the room as the stick broke. He then instructed the eldest to gather up all the remaining sticks and bring them to him. When he had all nine sticks in his hands he slowly bound them together with a leather strip. When he had finished he asked his strongest son who worked in a rock quarry to please take the bundle of sticks in his hands and attempt to break them. This very muscular son wrapped his massive hands around the nine sticks and began to apply pressure. Soon the bundle began to bend ever so slightly. The man’s muscles began to bulge as he continued to apply pressure. However, as hard as he bent, the sticks would not move beyond their initial bend. His face began to turn red and the veins in his neck bulged, but the sticks would not budge. Minutes later, and sweating profusely, the strong man gave up exhausted. Everyone had watched this demonstration in silence. The old man faced his children and said, “I have a parting message for you and hopefully a life lesson. All my life you have been fighting amongst yourselves. You have not supported each other and have not acted as a family. When you do that understand that you stand alone. You are weak and anyone can break you, even someone as frail as myself. However, when you stick together, when you support each other not even the strongest can break you.”

Until next time, may you live in gratitude and cooperation with one another.